Starting with the violin at the age of 8, Chad moved around on a variety of instruments including guitar, drums and piano, before discovering the true passion for the bass and singing. 7 years of studying voice with the Maestro David Kyle rekindled a love of classical and opera, which led to a run of live operettas and musicals.  Shortly after that (now defunct) Rush tribute “Vital Signs” hit the Seattle scene, followed by Led Zeppelin tribute “No Quarter” and currently playing the role of Ronnie James Dio in Stand Up and Shout's "Dio Rising".  Chad formerly owned a club in Georgetown, Seattle called “The Mix”, a live music venue/bar/restaurant & recording studio.  Since the sale of “The Mix” Chad has migrated his recording studio “Khaos” to the Sodo district of Seattle.

Visit some of Chad’s Side Projects 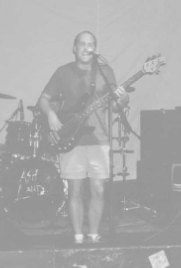