Blame it on Ian Gillan. Before hearing his voice, I really wasn’t interested in rock and roll. I saw it representing hippies who just sat around saying “Groovy”. I hated that word. It sounded so stupid! Then one day , over at my aunt and uncles place in Spokane, my cousin was playing Deep Purples’ “Machine Head” for my older brother. While the rest of the band was certainly brilliant, it was the voice of Ian Gillan that hooked me. Groovy! On the trip home, I remember annoying the crap out of my brother by humming the melody to “Highway Star” all the way.From there it way a series of trials to find my place in music. It started with piano lessons that, while useful it the long run, didn’t hold my interest. From there I did the elementary school band thing. That didn’t hold me either. It wasn’t until watching Angus Young perform that I said “That’s it! That’s what I should be doing!”

I’ve jumped around a lot finding things that spoke to me. From hard rockers like Black Sabbath, UFO, AC/DC, and Iron Maiden to more complex bands like Yes, Rush, and Pink Floyd. I try to embrace a lot of things musically, even classical, jazz and musical theater. 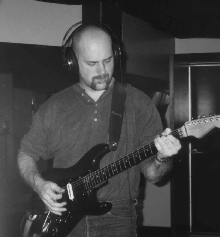